The Port of Weipa is situated on the eastern shore of the Gulf of Carpentaria in far North Queensland. Weipa is Australia’s largest bauxite port, exporting approximately 30 million tonnes per annum on post-Panamax vessels under DUKC® advice since 2008.

OMC works closely with both Rio Tinto and North Queensland Bulk Ports Corporation (NQBP) to facilitate efficient operations at the Port of Weipa. OMC has a long history working with NQBP stemming back to Hay Point, where the first DUKC® was installed in 1993.

The port itself is located at Lorim Point at the end of a 25 km dredged channel. The long channel is needed to find deep water as the bathymetry around Weipa is relatively flat. Being located at 12 degrees S latitude, Weipa is frequently subjected to the cyclones that develop in the Coral Sea and in the Arafura Sea each Australian summer, and to the annual monsoon conditions that occur every autumn.

These annual weather events have a significant impact on Weipa’s operations. After cyclones occur, DUKC® depths need to be quickly updated with post-cyclone survey data to ensure the DUKC® units reflect the post-cyclone conditions. An annual dredging campaign occurs at the end of the monsoon season, where the sediment that has accumulated over the past year is dredged, thereby preparing the channel for the next year. OMC assists the Port of Weipa in preparing for the annual dredging by analysing the survey data, identifying dredging locations, calculating sedimentation rates, and advising on dredge depth targets to allow Weipa to maintain target drafts throughout the year.

2019 was a particularly intense year for the Port of Weipa because the monsoon was much stronger than normal, and the port was subject to three cyclones, all of which induced significantly more sediment in the channel than usual. Additional work was required to assess if the dredge would be able to clear the channel within its scheduled timeframe. The dredging campaign was finally competed in July 2019 and the port returned to regular operations. 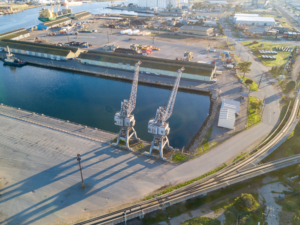 Advanced technologies, including Dynamic Under Keel Clearance System (DUKC®) and the

This website uses cookies to improve your experience while you navigate through the website. Out of these cookies, the cookies that are categorized as necessary are stored on your browser as they are essential for the working of basic functionalities of the website. We also use third-party cookies that help us analyze and understand how you use this website. These cookies will be stored in your browser only with your consent. You also have the option to opt-out of these cookies. But opting out of some of these cookies may have an effect on your browsing experience.
Necessary Always Enabled
Necessary cookies are absolutely essential for the website to function properly. This category only includes cookies that ensures basic functionalities and security features of the website. These cookies do not store any personal information.
Non-necessary
Any cookies that may not be particularly necessary for the website to function and is used specifically to collect user personal data via analytics, ads, other embedded contents are termed as non-necessary cookies. It is mandatory to procure user consent prior to running these cookies on your website.
SAVE & ACCEPT